Despite all the anti-allergy shit the doctor gave me for the rash, it was getting worse and worse. Woke up yesterday and there was all little fluid things on it, ack, looked disgusting. And it was spreading. By the evening my back was severely aching all over, especially in my lower back with pain going right down my legs. The Panadol was doing nothing and I was eating them like lollies. It hurt to even move, with the rash stinging like hell and the pain in my back. I told Simon I was going to Emergency to see what they said.

Got there and was put in quickly as the triage nurse didn't want me sitting out in the waiting room in case it was contagious. Long story short they disagreed with the GP I saw the day before and said it was "Shingles". Never heard of it. It starts on your leg and lower back and spreads a bit from there. Can go under your arms too. They just let it run it's course and you stay home to get better, about 2 weeks. Is contagious because of the blisters that break easily. Simon looked up a bit about it last night on the net, evidently you can only get it if you've had chicken pox. I'll look up more about it in due course.

Apparently it's very painful. No wonder I've been in fuckin pain! Have been sounding like a broken record to Simon, even giving myself the shits. But it has been just so painful. He's been bewildered as well as to WTF is going on. I was starting to think I'd done something really major to my back. But anyway at least I know what it is now for sure, and am being treated appropriately.

They've given me Endone and Endep for the pain. Never had them before, very strong compared to Panadol. It's still taken overnight though for the pain to settle down. They said it was important to get on top of the pain now otherwise it can linger on after getting better. They gave me a doctors cert for 2 weeks at work, oh they're going to love that. Sent work an email with a scan of the cert and a picture I took of it this morning. Looks revolting. 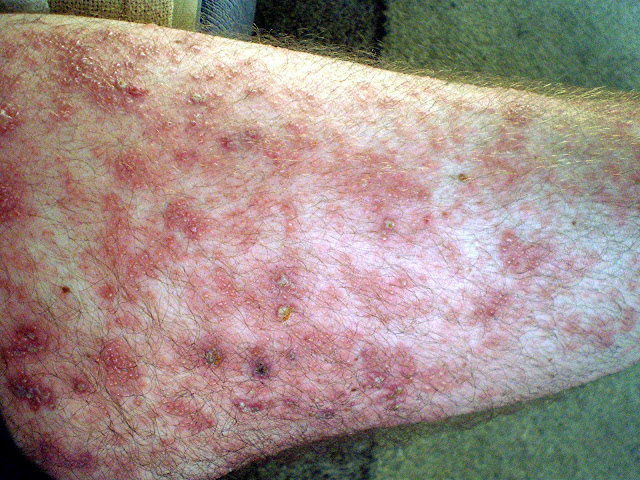 Simon is going on like "I can't believe how many illnesses you get", and I'm saying "It's not my fault you know". Eventually he got the picture.

The picture above is the worst part, just on one leg. Weird. And a bit on my lower back. But it certainly freaked me out when I didn't know what it was.