Yesterday afternoon I was extremely tired from work. Got through the whole week (*faints*) and it was full on all week. Even so was getting behind on the work again by the end of the week. By the end of work Friday I was exhausted, felt like I was getting a cold, and just wanted to go to bed. Stopped at the pub nearest home for a couple of beers to relax on the way home and maybe feel a bit better, felt like shit.
Usual crowd there, working people doing the same, beers after work before home. I probably stayed a bit longer than I wanted to as it was soon happy hour at 5 and only $3 beers. Was pretty well ready to go home not long after, just finishing a beer.
Then the police walked in. Eight of them. With a sniffer dog. For no reason whatsoever it appeared, just wanting to bust someone. FFS it was a group of harmless people having drinks after work, and then they come in the the fuckin gestapo. Ugh, what a joke. Not exactly a pub full of criminals, just workers. 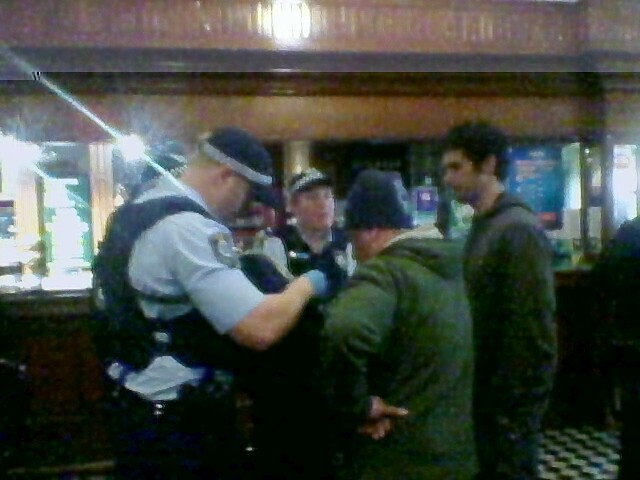 I made some smart assed comment. Yes big time crime here. I mean fuck, I'm paying these cunts wages to protect me from real criminals, not come and hassle me after working all day. Of course my comment (can't remember what it was, just some flippant passing thing) attracted their attention, and a cop came over and said I was "intoxicated" and to leave the pub. I said that was fine as I was about to anyway. Started to drink the last bit of beer in the glass before leaving, and he grabbed it off me, spilling some on my front, telling me I wasn't allowed to have that last bit.
Sheesh. Couldn't be bothered with this neanderthal. No point in arguing with them as they'll just charge you with something. "Failing to follow a police directive" is always a good one for them. They can tell you to do any stupid thing, and if you refuse they'll charge you, how fucked up is that! I was tired and shitty and off home, zipped up jacket and beanie on, left peacefully, what a fuckin joke.
Was very happy though afterwards. I've had run in with the local neanderthal cops here before. I reckon I'd be on some dartboard of theirs at the cop shop. Was pleased I just let it all go, not worth the bother, and subsequently wasn't arrested. A major victory!
Posted by Unknown at 12:56