Are taxpayers giving too much to our Olympians?

The story of the straight couple whinging about their freely provided Olympic accommodation caught my eye the other day. It's seems the poor dears have been surprised at the reactions to their drivel that they freely provided to the media. Oh my bleeding heart. But still the bloke refuses to accept the decision, in doing so even the main stream media is now bagging him (it's almost blasphemy in Australia to bag an Olympian):

He says he's accepted the umpire's decision but, like a teenager at a school camp, Russell Mark is still planning to sneak into his wife's room in the Olympic village.

But he has a plan which could stretch the friendship.

"It's like cricket ... at the end of the day the umpire gives you out and you've got to walk," Mark told reporters at Olympic Park in London on Thursday.

"I've walked. And I'll probably walk across the corridor into Lauryn's room. As far as I know, that's not illegal. It's just I've got to get out of there before the sun gets up."
........................
The pair met when Mark arrived in London on Tuesday and discussed the village rooming plans, which Green had earlier said were designed to suit all athletes and could not be changed to suit individuals.

The AOC said if the Marks were given a room together, five other female athletes would have to share one bathroom.
Link

I'm honestly dumbfounded by the extent of this bloke's immaturity and juvenile capacity. Yet taxpayers are supposed to cough up $ galore to fund his jaunts to various Olympic events, like it's going to do us all good somehow? Seeing someone like that represent my country isn't exactly helping my motivation to engage HIV in a positive way. More like makes me want to do a bowel movement.

Thinking I must have entered the world of cultural blasphemy (for those who think Australia does actually have a culture) I searched online for perhaps some like minded heretics. To my surprise, even without the buffoon "shooter Mark", I found people who were already questioning our level of gov funding to said buffoon:

For various reasons, the Australian taxpayer provides significant subsidies to athletes and to the Australian Olympic Committee. Yet the taxpayer never get a return on that investment.

If a student goes to an Australian university, he or she will usually receive a subsidy through the Higher Education Contribution Scheme (HECS) for undergraduates, which is a contingent loan repayable when the student’s taxable income rises above a certain level (about $45,000 now). The HECS scheme (now HECS-HELP and FEE-HELP) recognises that a student internalises the benefits of tertiary education, while there is a public subsidy component for the positive externalities of such education.

Yet a similar scheme does not apply to elite athletes, where the costs are considerably greater than any university place and where, arguably, the benefits are more fully internalised by the athlete. This is a distortion, and Australian athletes should be required to repay some of the costs of their training when they have sufficient financial resources.
Link

OMG! Heretics unite! Now that would make me feel better about this whole thing. Perhaps seeing "shooter Mark" having to pay back money that we all gave to him for the privilege of seeing him belittle the plight of many Australians in his claim of "discrimination". Not that he would realise that, he's too fuckin dumb. No wonder I feel like having a bowel movement when he speaks, he's got verbal diarrhoea.

But anyway, look at his shooter wife, she looks like she's in for some sponsorship money shortly (this just a Snip from the article). 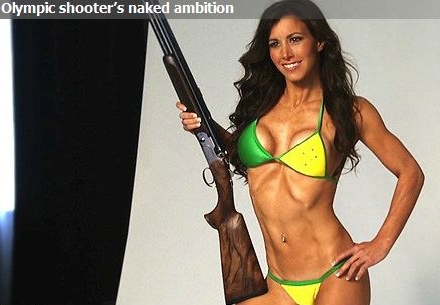 Maybe seeing her sponsorship deal fall flat on it's face because of shooter Marks verbal diarrhoea would motivate me a lot more than actually having to listen to his verbal diarrhoea? Given her body though not likely. Is this what we're paying these Olympians for?

And this one was a very in depth discussion on the whole matter:

The Rudd Government will also deliver a $324.8 million investment into the ASC funding base to create a secure platform to plan beyond Budget cycles.
In particular, this will assist in better preparation for major events such as the Olympic and the Paralympic Games.

This seems right - we don't fund Australian films to help people to become filmmakers, no we fund them because governments view film as integral to our culture and know that it costs a shirtload of money to make a film that people will pay to watch. We fund film schools like the Australian Film, Television and Radio School to help people to become filmmakers.

Is fifth on the medal tally where we should aim to finish? We are 52nd in the world in population; we are 13th in GDP, we are 10th in GDP per capita. Seems to me anything better than top 10 is punching above our weight.

Given America, Russia and China are always going to beat us, the best we can hope for is fourth. If the home nation is of any decent size -as is Great Britain next year - then fifth is a more realistic best outcome.
But given the link between money spent and position on the medal tally is aiming for fifth worth it?
What do we give up to come fifth?

Yes we want to do well - but if this is for cultural reasons, then perhaps the funding for sport needs to be measured against and included the funding for other cultural activities. Would it be better we accepted just "Top Eight" at the Olympics at the expense of more money into painting, dance, music or writing?
Link

Or how about giving someone like me, who was until recently working only 3 days a week because of HIV health issues, a health care card? That's chicken feed compared to what they're giving this wanker shooter Mark.
Posted by Unknown at 11:01