Cher has apologised for being in a selfie with Turnbull :) 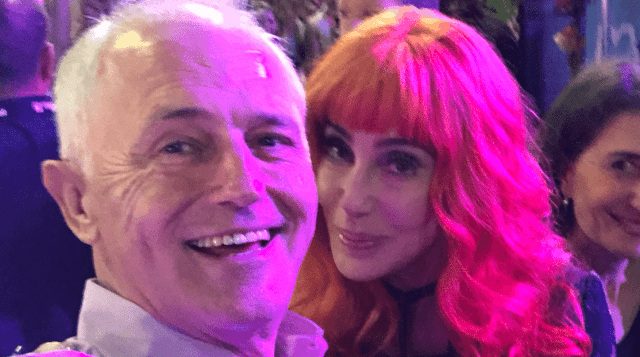 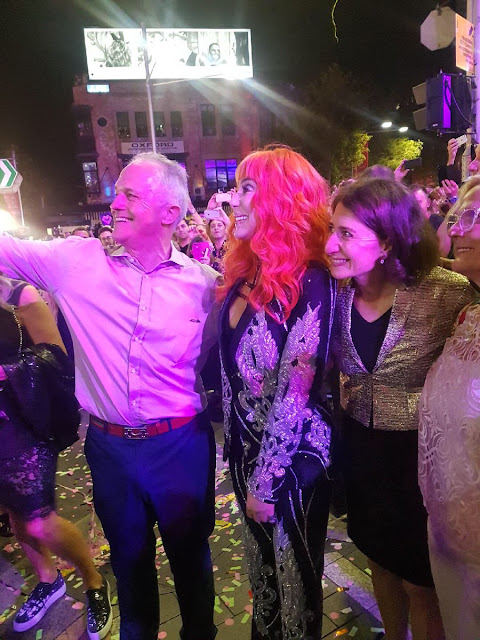 *Update: It was Destination NSW that invited him, a state tourism and big event body of the NSW gov, which is even worse. Like he sneeked in through the side door. All to take credit for our struggle.

Hi, the PM was invited as a guest of Destination NSW who have their own viewing spot at the Parade each year.
— Sydney Mardi Gras (@sydneymardigras) March 5, 2018

What's more he took a selfie with Cher who was unaware of what Turnbull had put us through last year. Months of hatred and bile directed at us on the national stage from church leaders, bigots, and the likes of Lyle Shelton of the Australian Christian Lobby which questioned our right to even exist as part of society. Questioning the legitimacy of our personal relationships and lives, even the legitimacy of kids raised by same sex couples. Every fringe nut job was given a stage and permission to "have their say", all because he was too gutless to stand up to his own party fringe dwellers.

Cher has since apologised for appearing in the selfie.


Prime Minister Malcolm Turnbull has raised eyebrows after appearing at Mardi Gras and seeming to congratulate himself for the marriage equality postal survey.

“It was like the nation gave same-sex couples an enormous hug,” Turnbull said during the broadcast.

“It was a vote for equality, a vote for respect and what a huge vote it was.”

Turnbull appeared during the parade—to booing—after the Dykes on Bikes and Boys on Bikes, later snapping a selfie with Cher.


“We did it despite you, not with you,” tweeted one person.

“No other photos of Turnbull at Mardi Gras have appeared. Nobody but Cher was fooled by him,” posted another.

Some people tweeted at Cher directly about Turnbull and the harm caused by the marriage equality debate.

“I urge you to say something about Malcolm Turnbull and renounce the photo that you had with him at Mardi Gras because he doesn’t care about gay people,” wrote one person.

The Goddess of Pop and prolific tweeter engaged with the discussion, asking for more information about Turnbull’s relationship with the LGBTI community.

“The man you talked to is a liar,” tweeted one person.

“He illegally detains refugees/asylum seekers who are PoC in off-shore concentration camps were they are tortured, abused and killed. He speaks only in support of Trump.

“He ensured LGBTIQ people were taunted and abused for months last year. Sorry.”

Cher was quick to reply, saying she was sorry.

“Am so sorry. Guess that’s why I have few friends who are politicians. He seemed very open and excited about Mardi Gras and LGBTI community,” she posted.

During his appearance at the parade, Turnbull seemed to thank the original 1978 Mardi Gras protest for his own marriage.

“It’s 40 years old, and 40 years ago Lucy and I had our first date, so our love affair is a result of Mardi Gras,” he told reporters. Star Observer

Welcome to Sydney, Cher! @GladysB Lucy and I and all your fans thrilled to be with you at the 40th Mardi Gras & first since Australia achieved marriage equality. pic.twitter.com/EIYDaq2OTG
— Malcolm Turnbull (@TurnbullMalcolm) March 3, 2018

Am so sorry. Guess that’s why I have FEW Friends Who Are Politicians.He Seemed Very Open & excited about MARDI
GRAS,AND LGBT COMMUNITY.
— Cher (@cher) March 4, 2018