This story captured my attention the other day when the courts found that KFC was responsible for the food poisoning that caused severe brain damage in a girl, who's family all became sick after sharing one of their "Twisters" with each other. I was disgusted how the KFC response was to deny all responsibility and call the family liars, indicating that the family had thought KFC an "easy target" during the trial.

Today they were ordered to pay the family $8 million in compensation, plus court costs to the family, within 28 days:

The family of a young girl who was left severely brain damaged from salmonella poisoning after eating a KFC chicken twister has been awarded $8 million in damages plus costs by the NSW Supreme Court.
Seven-year-old Monika Samaan became seriously ill after eating the chicken wrap at the Villawood KFC in 2005, suffering brain damage that has left her confined to a wheelchair and unable to speak.
KFC denied it was responsible, challenging the family's claim during a four-week trial.

Justice Stephen Rothman found in favour of the family last Friday, and this afternoon he ordered the fast-food giant to pay the family $8 million in compensation plus costs.
In a statement to the media, the lawyer for the Samaan family George Vlahakis, said Monika's severe brain damage and severe disability had already "exhausted the very limited resources of the family".
"Monika is now a big girl and they are finding it increasingly difficult to lift her and to look after her basic needs as well as look after Monika's younger siblings," Mr Vlahakis said.
"The compensation ordered is very much needed. KFC have to date been determined that Monika does not receive a cent."
KFC has indicated that it intends to appeal against the decision of Justice Rothman as it has "a responsibility to defend KFC's reputation as a provider of safe, high quality food".
Mr Vlahakis said last week that KFC should accept the court's decision.
"KFC chose to put Monika and her family through a court hearing over several weeks, which they adjourned twice so that the process so far has taken seven years since she sustained her injuries," he said.

"KFC of course got a completely fair hearing and were represented by a large team of lawyers from a multi-national firm and their own in-house legal team.
"Monika is represented by a sole practitioner law firm and the family has virtually no resources other than their love for one another, their courage and their belief in themselves and their case."
During a four-week trial in 2010, Monika's father Amanwial Samaan told the court he and his wife Hanna, son Abanou and Monika all fell ill with vomiting and diarrhoea after sharing the Twister.
Unlike Monika, who was in a coma for six months and in hospital for seven, they recovered.
Monika took the court action through her father. 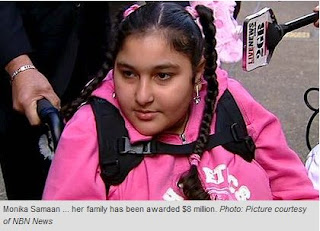 KFC's behaviour alone (IMO) in this case is deserving of never me eating there. Or perhaps their not accepting the verdict and appealing, amazingly claiming that they are "a provider of safe, high quality food". Oh FFS! You don't need to be a rocket scientist to know that they're fuckin serving up deep fried chicken, and that there's been a few cases here of their stores being fined by the relevant food authorities for breaching regulations (including picking up stuff off the floor and serving it to customers). Or that we have 15-18 year old teenagers involved in the food preparation process; I mean who the hell wants to buy something that a 15 year old has chucked together? I can do much better in my own kitchen blindfolded. But ultimately the reason for me never eating there is that their food is not only unsafe health wise, particularly for someone HIV+ who has health concerns already like me, but it's also unsafe because you don't know if you could end up with food poisoning or not.

As a person with a struggling immune system, trying to avoid going on medication if it's possible, and after all my health issues last year, I'd not touch KFC with a fuckin ten foot barge pole. I can't afford the risk of contaminated food, let alone the slow burn from bad health that it brings generally.

And let's not forget, this is a foreign company to our shores. How dare they poison us and deny any wrong doing.
Posted by Unknown at 18:03