I finally finished the "U2 By U2" book. A long one, over 400 pages. It took so long to read as much of what was talked about in the interviews with the band were very thought provoking, and I couldn't just wizz through a whole chapter as I wanted to take it all in. All four of the band seem to find great meaning in life's experiences and use those experiences in their music. I guess that's what art is all about, finding expression about how life affects you.

There was one last quote that was very interesting for me. Especially given the GFC of late and this being written before it:

"In the case of 'Vertigo', I was thinking about this awful nightclub we've all been to. You're supposed to be having a great time and everything's extraordinary around you and the drinks are the price of buying a bar in a Third World country. You're there and you're doing it and you're having it and you sort of don't want to be there. And it felt like the way a lot of people were feeling at that moment, as you turn on the telly or you're just looking around and you see big, fat Capitalism at the top of it's mountain, just about to topple. It's that woozy, sick feeling of realising that here we are, drinking, drugging, eating, polluting, robbing ourselves to death."
Bono, U2 By U2

The book ends after the South American leg of the Vertigo tour. Although it took ages for me to get through it, it's a big accomplishment for me to do so. I used to enjoy reading, but since the head collapse in 2009 it's been almost impossible to read anything. One book I tried to in fact had a main character in the first few pages try to kill herself. *sheesh* Not exactly what I needed at the time. It's still there in the waiting to be read  pile.

I've chosen a next book to read. It's been in the waiting to be read  pile on the bedroom floor for months. I picked it up a while back up at Simons place, he had a box of old books he was going to give to the local community centre there for people to borrow and read. Asked me if I wanted any of them. Most of them looked excruciatingly boring, but this one caught my eye: 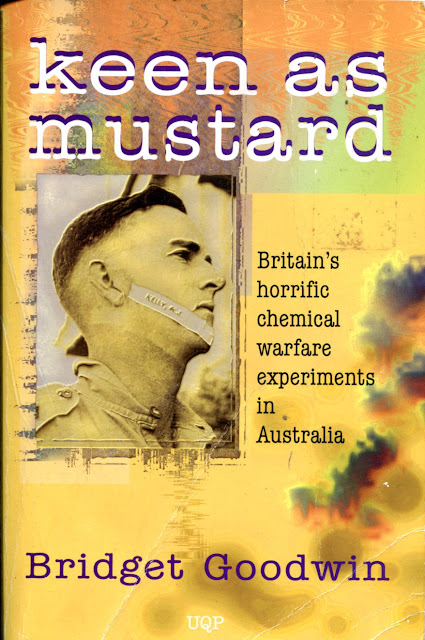 There was a documentary made in 1989, and this book was put out afterwards. I'd never heard of such a thing, but the British used Australian volunteers for chemical warfare experiments in World War 2, in Melbourne and up in Northern Queensland (the state north of here, NSW). I found a bit of a review online:

The second story focuses on chemical warfare experiments in Australia, beginning with the "sensitivity tests" carried out in Melbourne in 1942 on 783 soldiers. Goodwin then describes the mustard gas trials conducted in north Queensland to explore the effects of chemical warfare under tropical conditions, and the Brook Island trials, which involved dropping chemical bombs on the island and assessing their effects on animals placed on the island prior to the bombing and the volunteers who were landed on the island after the bombing. The final chapter considers post-World War II research on the effects of chemical weapons and the struggle by some former volunteers to secure compensation.

Goodwin details the experiences of the Australian soldiers, scientists and support staff involved in the chemical warfare trials during and after the Second World War. The recollections of volunteers, many of whom sustained dreadful burns and injuries, are especially disturbing, and their memories are supported by the photographs in the book. As Goodwin comments, "It is evident ... that concern for the welfare of volunteers was not a priority". Keen as Mustard is not, however, merely a catalogue of the horrors of the Australian trials. One of the strengths of Goodwin's approach is that she emphasises the complexity of this story. She situates the horrors which she recounts alongside, for example, memories of the female members of the research staff: "For many ... their time bunking down in makeshift housing at Innisfail, or sleeping on the beach at Hinchinbrook Island during the Brook Island trials, were among the best years of their lives".

Keen as Mustard is an important addition to the historiography of Australian involvement in wars, and a reminder of the ease with which the rights of individuals can be sacrificed in times of "national emergency".
Link

It apparently created quite a stir when the documentary was released, but I can't find any free version to watch online. It was screened in Australia, Britain, Japan, Canada, the Netherlands and New Zealand. There's pictures in the book, here are some: 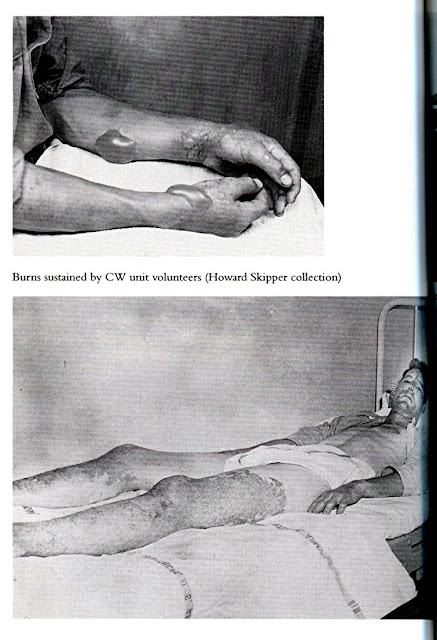 It is good to be able to read books again. The depression and head collapse was paralysing mentally.