I've not had a Christmas tree for 5 years. This year however I thought it might be apt, given how the pain monster appears to be giving me a break with the memories associated with it.

So, in honour of me looking like I'm turning the Christmas corner, I have got myself a tree. It is a rather unusual tree though, not at all in the traditional Christmas sense, but more so according to the piss take I consider Christmas deserves.

I went and got an incredibly tacky angel to stick on top of it, and a length of tinsel (gotta have the tinsel). Before that I had remembered the traffic cone that I apparently bought home one night, in a just slightly inebriated state. I discovered it in the middle of the lounge room the next morning. Dunno why exactly I bought it home. It did have a wide reflective band around it which looked nice when headlights shine on it I guess, and the top looked, um, well I won't go into that...... I saw some cone shaped Christmas trees in the Hot Dollar shop, one of them had little lights shining and was about $60 FFS. And it was nowhere near as big as my orange traffic cone.

Here is the result: 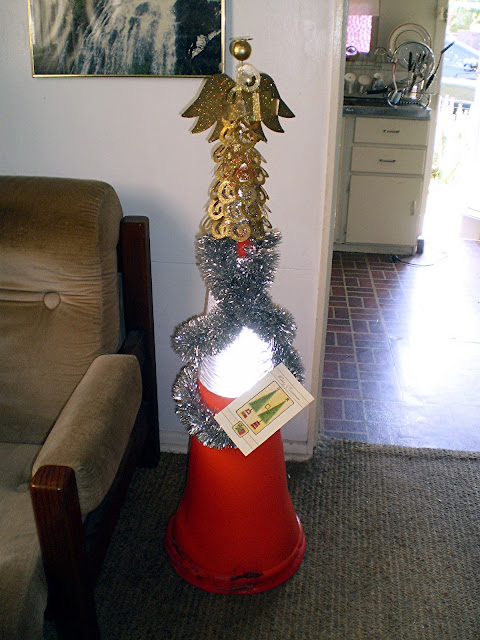 The incredibly tacky angel on top cost $8 at the Hot Dollar shop. There was another on about twice as tacky, just horrifying darlings, the deluxe angel. But that was $12 and I wasn't going to spend that much. The tinsel cost $2. All in all I thought quite a bargain.

I thought about getting some fake snow they sold there (yes, fake snow, just add water or some shit) but snow is just sooooo northern hemisphere. Maybe if they sold fake sand to put around it. But of course they don't. Evidently sand isn't part of Christmas. In keeping with the Australian Christmas, I thought of getting a bit of sand from the beach and putting it around the bottom. Would've looked quite nice, but I decided against it as the cat would've thought it was another indoor toilet to piss in.