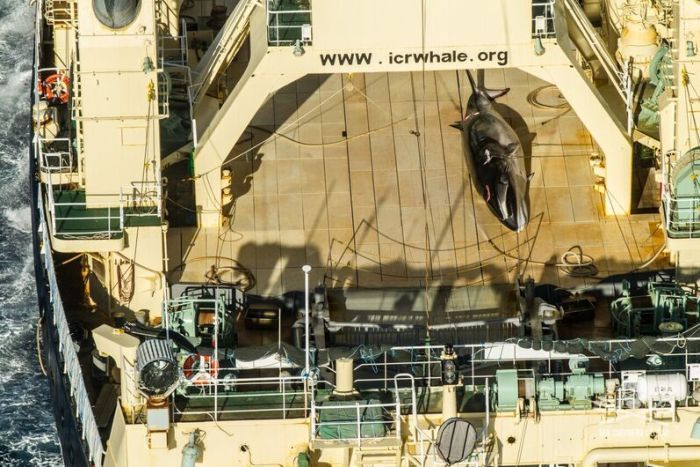 Sea Shepherd has been in the southern waters off Australia, to try and stop illegal whaling by the Japanese in Australia's Whale sanctuary. The photo was taken by the Sea Shepherd helicopter before being quickly covered by the crew.

So where is the Australian gov? Why isn't our navy down there? This is a clear cut case of Japanese whalers flouting Australian law.

To make matters even more ridiculous, the Japanese prime minister himself is in Australia having chats with the gov about this and that.


Sea Shepherd says it has caught Japanese whalers in Australian waters with a slaughtered whale on board.

The group has released pictures showing a dead protected minke whale on board the Japanese whaling ship Nisshin Maru, allegedly in Australian waters.

A Sea Shepherd helicopter spotted the vessel on Sunday morning with two harpoon ships nearby.


"They're hit with an explosive harpoon that goes straight into their body, hooks come out and shrapnel is sent through their body, it's a terrible bloody death… these whales can take up to 30 or 40 minutes to die," Jeff Hansen from Sea Shepherd said. ABC