Lieberals "will be decimated" at election - senior Lieberal strategist 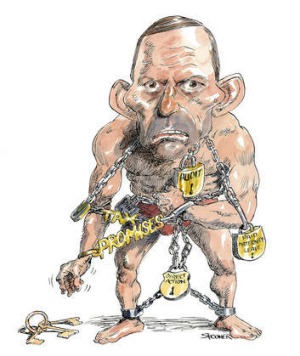 The list goes on and on. But it's been obvious since the early days of Abbott right up until now that the Abbott/Turnbull gov is one that is at war with the people of Australia. They're a gov controlled by blind ideology, so blind as to be completely at odds with what the Australian people want them to do. Blind Freddy could see this, but not them.

Even their dog whistling never ending crackdowns and war on the poor that they've resorted to on so many occasions is wearing thin with the public, with now around 60% of Australians saying there should be no more cuts to welfare in the coming May budget, As Lenore Taylor points out:


But the real problem for the “red meat” benchmark for policy-making is that voters are apparently not buying it anymore.

A Newspoll this week found 61% oppose cuts to welfare in the May budget, including almost half of those who identify as Coalition voters. Of course this doesn’t dive into which types of “welfare” the respondents are thinking about but it left the editorial writers at the Oz in a tizz. “How do they imagine the budget is to be repaired?,” they asked, rhetorically, having already declared this task to be impossible without “welfare reform”. The Guardian

But even worse, a leading strategist in their own party is sending out red alert warning big time by going to the media himself and publicly chastising his party, saying that they face electoral doom at both state and federal level if they don't change tack.

One wonders how this is possible with the current gov being ruled from the far right back bench and solidly in their ways. I would say that with the likes of Abbott wanting such out there things like the Human Rights Commission abolished that changing direction for this gov is entirely impossible.


Known for his ruthless political savvy, Mr Greene was an old-fashioned, behind-the-scenes political operative. His public declaration of despair follows on from the resignations this month of Liberal federal director Tony Nutt and his deputy John Burston.

“They would not have supported the warfare this government has declared on its citizens,” Mr Greene said.

“The Turnbull government has attacked every core constituency, small business, superannuants, pensioners, families with children, all because they have a budget that is out of control.

“They have not done anything about their own backyard. Public servants still fly at the front of the plane.”

He warns that the crashing political fortunes of his party is being accompanied by administrative collapse at federal, state and branch levels, with membership and donations in freefall.

Mr Greene said a major Liberal Party constituency was small business, yet they had been burdened with excessive regulation.

“This is a government which only listens to big business,” Mr Greene said. “Small business has been annihilated.” The New Daily