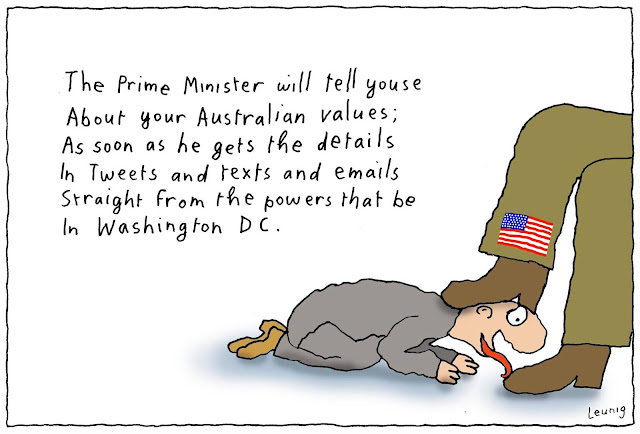 Ex PM Paul Keating has given a speech at the Lowy Institute calling for Australia to put it's own interests first in stead of just tagging along with every US action. Presently it seems that those in Canberra are too scared to speak out and disagree with the US over anything.

Speaking at the Lowy Institute in Sydney, the former Labor prime minister said the alliance with the US did not mandate slavish devotion to American demands “as the Uriah Heeps of this world” – a reference to Dickens’ fulsome character from David Copperfield.

“The alliance, if we had no document anymore, we would remain friends with the United States into the future. We’ve been in every battle [alongside the US] since the first world war. We’ve got a whole lot of cultural and historical common ground but this idea [exists] that we, as a sort of client state, have to shape up all the time or ship out – a view that is pretty much ingrained these days in Canberra – we have to get along with them otherwise they’ll shoo us away.

“Look at the French attacks on the US over Iraq and yet France enjoys a normal relationship with the United States today. The Canadians the same.

“This idea that we’ve got to be the Uriah Heeps of this world, dragging along behind them. We should be running an altogether independent foreign policy, with much more independence within the alliance structure.

“Australia should be putting its interests first.” The Guardian