In my email this week (finally checked it yesterday) there was the latest one from Positive Life. In it was a link to the Talkabout magazine, which has just been made available online. I've looked for it before but to no avail. All they had was the odd article from it. This however is cover to cover, in either a browser (the wonders of internet animation) or PDF download. This the cover of the first full issue online: 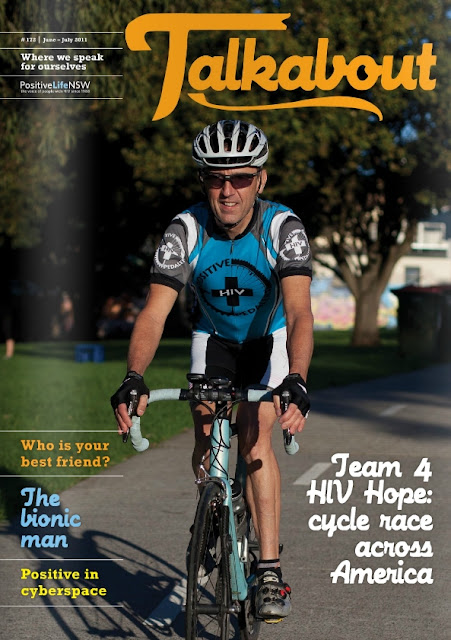 (click to enlarge)
And the link:
Talkabout Magazine online
It can be a bit hard to come by otherwise. I live a bit away from Darlinghurst and Surry hills, and there's no place around here that has it available. It's worth a look even though a lot of the material is local, as they often have some very good articles in it. It's specifically to do with HIV issues.


Having a very quiet weekend. Went to bed early last night at 6pm with a headache, had had it all day and was getting worse. That one I get sometimes on the right side of my head, sort of migraine-ish but nowhere near as bad as a full blown migraine. Does wear you down after a day of it though, even makes me feel nauseous and not much like eating. Managed to eat a reasonable dinner of meat and potatoes though. Took a couple of Panadole and went to bed. Simon rang at 8 to say hi, and I was so asleep it took me a while to realise that the dreadful annoying noise I was hearing was the phone next to the bed. Needless to say it wasn't a very inspiring conversation from me at the time.
Went back to sleep again, cat luxuriating on the other side from the electric blanket. I leave the other side on too as I toss and turn a lot sometimes and use the whole bed. Cat has obviously realised this and plonks itself there every night now. I don't mind it's nice I think, better than sleeping alone.


Got woken up again at about 2am, daughter came home from being out Sat night with some friends, and they were all talking loudly in her room next door. Texted her to keep it down please, which they did. She's understanding like that, texted back "sorry dad". She seems acutely aware of my HIV and my need for decent sleep. Even things like if she gets a cold she worries about giving it to me. I just say, "well if I get it I get it". That's life really. Can't live in a cocoon. In fact the odd cold or two might be a good thing to keep my immunity up for such things. Given that my CD4 count is so high (still can't believe that result of 660) a cold isn't going to be that much of a crisis I wouldn't expect.
A bit hard to get back to sleep after that so listened to some music for a while, just got a new MP3 player after my old one carked it. Amazing what they have now. The thing is tiny, and holds 4 gigs. The first computer I bought ages ago had only a one gig hard drive. The sound is incredible, it has some program in it to make it so, can't believe such a big sound can come from something so small. Was just under $70, much cheaper than getting one of those rip off Ipod things. Anyway got back to sleep after about an hour.
Posted by Unknown at 11:36