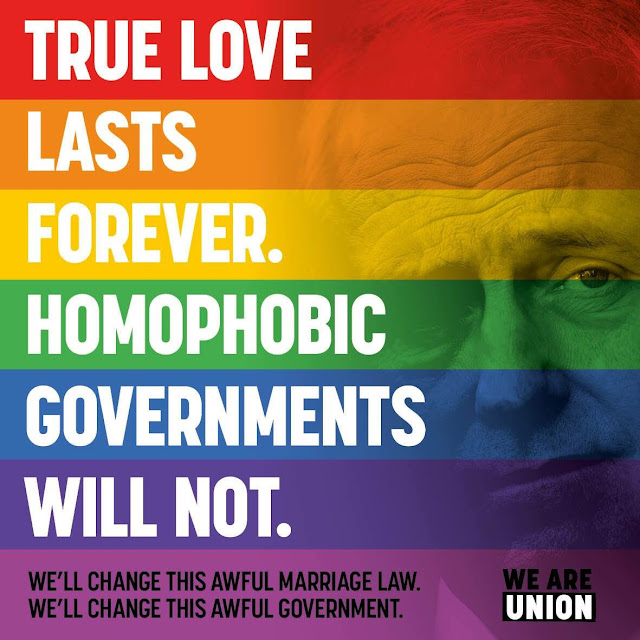 Labor has reiterated it's commitment to bring in marriage equality within the first 100 days if it wins the next election.

Asked what Labor would do if the postal survey returned a no vote, Dreyfus said it was “clear Labor policy” that “marriage equality should happen in Australia”.

“We don’t want to be the last country in the developed world to have marriage equality. And we’ll bring it to the parliament after the next election if we’re successful.”

Dreyfus said the high court challenge to the postal survey was backed by “strong arguments” that there was no legislative authority to spend $122m and it was beyond the power of the Australian Bureau of Statistics to conduct the poll.

Asked to estimate its chance of success, he replied: “I’m not going to give legal advice on national TV. Let’s say 50-50.” The Guardian

To me this is confirmation that the postal survey is rigged for a "no" vote. That it's an unscientific survey that is an insult to the intelligence of Australian pollsters and to the lives of Australia's LGBT. How you could justify this joke as any sort of gauge of the overall opinion of all Australians is beyond me.

What's more, if the survey says "yes" then what guarantee is there that the Lieberals will then go ahead and have a free vote? They've been against us every step of the way. Who's to say that the lunar right will threaten to withdraw support for Turnbull if he goes ahead with it? Nothing would surprise me from this lot.

I've thought about it a lot over the last few days and I still haven't changed my mind. I simply can't, with good conscience, bring myself to vote in this shame survey. To me it would be participating in the homophobia of the Liberal party. It's so unfair in so many ways, and it's just plain wrong. Rather I can do what I can to see this homophobic gov turfed out of office at the election. To me this is the only clear course to marriage equality that doesn't involve us LGBT enduring hate and lies from extremists. A Labor gov is and has been committed to marriage equality for some time now. I would rather wait than go through this postal survey.

The High Court has listed the challenge against the survey for Sept 5th and 6th.

Meanwhile, giving more credence to the whole survey being a sham, the gov doesn't know how Australia's homeless people would vote in it, further disenfranchising young LGBT:


Some of Australia’s most vulnerable people — those with no fixed address — could be further disenfranchised in the postal survey on marriage equality, in an issue that will disproportionately affect young LGBTQI+ Australians who are over-represented in the homeless system.

In a compulsory election, the Australian Electoral Commission works closely with homeless support groups to sign up as many people with no fixed address to the electoral roll as possible. But the postal survey, should it survive a High Court challenge, will not be run by the AEC. It will be run by the Australian Bureau of Statistics [ABS], which has little experience running nationwide polls like the postal survey.

Homeless groups fear the government has not made adequate preparations to ensure young homeless people will be given postal ballots to have their say on same-sex marriage in the proposed postal survey. Junkee

The ABS? Oh FFS, look at the mess they made of the census fail!

Also, the gov has admitted it almost let kids vote in the survey:


As political commentator Stephen Murray laid out in a comprehensive article on the issue, 16 and 17-year-olds are able to apply to be on the electoral roll. They aren’t able to vote until they turn 18, but they are legally permitted to enrol.

The legislation makes it very clear, numerous times, that 16 and 17-year-olds who have registered to vote are on the roll, which would appear to give them the right to take part in the postal plebiscite under the government’s current ministerial direction.

The government maintained that 16 and 17-year-olds were not permitted to vote, but legal experts said the claim was unlikely to stand up in court. It really, really looked like the government had fucked up. Junkee

New: The ABS is telling people it won't have a solution for overseas voters until two days before the rolls close https://t.co/PPxt8BVkxI
— Lane Sainty (@lanesainty) August 16, 2017